Oklahoma Sweetheart Ashley Ehrhart was crowned Miss National Sweetheart 2021, held on September 5th, in the McFerren Park Civic Center. Ehrhart was beaten 26 contestants from across the country by a panel of distinguished judges from the pageant world.

Ehrhart is a veteran of pageant competition having competed in the Miss Arkansas competition of the Miss America Organization from 2017-2019, earning second runner-up in 2017 and the Miss Oklahoma competition in 2021, earning third runner-up.

Ehrhart is a 2019 graduate of Arkansas State University where she majored in psychology. In her contest entry form, Ehrhart said she selected this major because she has always been passionate about advocating for positive mental health and created the “Defeating Depression: Promoting a Healthy Mind” initiative, which works with businesses, schools and her state’s legislative members to ensure that a healthy mind is a possibility for everyone.

Her platform statement for the pageant reflects this:

“There’s hardly a warning and you don’t see it coming, but its bite demands to be felt. Depression – an invisible illness that disrupts more than 260 million people’s lives. I know this because I was once one of them. In February of 2016, I was diagnosed with depression. The devastation of a global pandemic has left millions of people feeling as I once did: crippled with anxiety and consumed with sadness. I believe now, more than ever, is my time to stand up and speak out about an illness that attempts to grip the hearts of so many people. I take it as my duty to share my story to show that I have defeated depression, I have created a healthy mind, and I am in control of my joy and happiness. My platform focuses on the reality that depression is a battle, but it can be won, and it’s done through developing a healthy mind.

While depression can affect anyone, at any age, I have focused a majority of my time reaching young people about depression as 1 in 5 youth experience a mental health crisis. I know that through using my voice to speak, my ears to listen and with the opportunities presented to me, I will start a change in the way depression is seen, not just as an illness, but as an opportunity to — just as I have — achieve a healthy mind.”

As for why she wanted to compete at the National Sweetheart Pageant, Ehrhart said the pageant’s focus on tradition appealed to her.

“The National Sweetheart Pageant is about tradition. The tradition of the National Sweetheart Pageant is one of celebration, adaption and growth. I want to be a National Sweetheart Contestant because I believe that I represent the tradition of the pageant. I represent celebration as I consistently look for ways to celebrate not just my own community, but communities across my state. I represent adaption as I continually adapt my personal platform to ensure that I am working to meet the needs of not just a few, but of all. I represent growth as I look for ways to grow myself, working daily to become an effective leader, inspiring mentor and generous friend. This pageant challenges young women while giving us the tools to be successful not just during pageant week, but beyond. It would be an honor to be a part of this pageant’s tradition.” 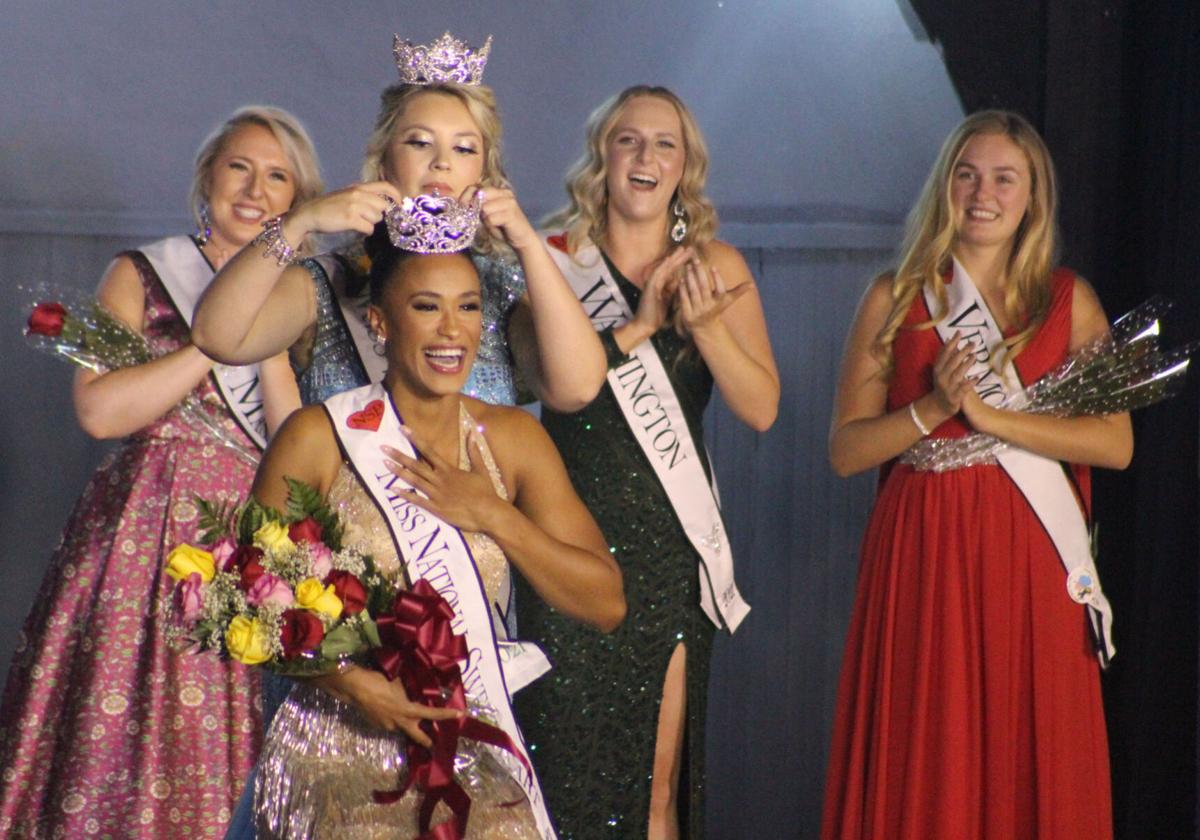 Later in the evening, the field was cut down to the final five.

When it came time to announce the final results, Zavitz was named fourth runner-up, Tinius was named third runner-up, Menzner was named second runner-up and Thompson was first runner-up.

A variety of awards and scholarships are also presented during the pageant. The winners are listed below:

Prior to crowning the winner, the top five were each asked to share what memory from their time in Hoopeston stood out for each of them. “There are so many things to be thankful for in Hoopeston,” Tinius said. “You all have the most amazing hospitality that we could ever imagine.”

Tinius said the memory she would remember the most was going to enjoy the carnival rides in McFerren Park with her fellow contestants. “It was so much fun, we rode bunches of rides,” she said. “I’m a thrill seeker, so we were riding the ‘Scrambler’ and making plans to go see each other in our respective states and I’m thinking about how amazing these friendships have been coming out from here.”

“I’m definitely going to remember the friendships I made,” she said. “Especially with my two roommates Florida [Sweetheart Madison Zavitz] and Massachusetts [Sweetheart Kensi Riley]. We had an absolute blast staying with our host mom, Angie. I will never forget our late night chats, putting together our national costumes.”

And the new Miss Universe Italy is…

And the new Miss Texas USA is…