The reigning Mrs World Caroline Jurie has given up her crown after she was arrested for her involvement in the controversy during the recent Mrs Sri Lanka 2020 beauty pageant.

In a video that has gone viral, she is seen snatching the crown off the head of Pushpika De Silva, who had been named the winner of the competition at Colombo’s Nelum Pokuna theatre last Sunday.

Jurie claimed that De Silva was ineligible for the prize as she was divorced, and that the rules stipulate that all contestants must be married. However, while De Silva is estranged from her husband, the pair are still legally married.

In a post to Facebook, De Silva said she needed treatment at a hospital after the incident, seen by stunned spectators in a packed venue as well as a live social media audience.

As a result of the onstage incident, Caroline, as well as model Chula Padmendra, were arrested on charges of simple hurt and criminal cause on April 8. Since then, they have both been released on bail.

An April 5 press release from Mrs. World Inc. stated that the organization requested Caroline issue an apology. The statement read, “We are deeply disturbed and sincerely regret the behavior of our current title holder, Mrs. Caroline Jurie, Mrs. World 2020, at the crowning. Her actions goes against the Mrs. Sri Lanka code of conduct and predetermined regulations she is obliged to follow during her reign. We will review the aforementioned incident and we’ll be taking steps as deemed appropriate based on the outcome of our assessment.“

The statement also noted, “Let it be known, Mrs. World Inc. does not sit in moral judgment. If the delegate sent Mrs. Sri Lanka-World to compete in the international competition is legally married she will be accepted.“

In a video posted to Instagram, she explained her decision to step away from the pageant, claiming it had been “tainted” by the crowning ceremony. Despite surrendering her crown, Caroline explained she still disagrees with the organization’s decision to crown Pushpika, claiming, “My only intention was to stand up for the injustice caused to the competitors throughout this competition which was tainted with heavy politicization.“ 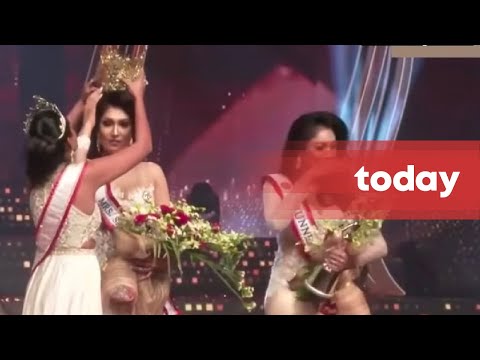 She continued, “The Mrs World pageant was not created to discriminate divorced or separated women but to celebrate the dreams of the married women.” Jurie also implied that there were other pageants De Silva could have applied to as a separated woman.

“I know I burst a few bubbles, created conversation and even a discussion about class and values that a queen wearing a crown should stand for,” Jurie said.

The former Mrs World stressed the importance of standing up for “values even if it means to stand alone in the front of disaster.“

“My only intention was to stand up for the injustice caused to the competitors throughout this competition which was tainted with heavy politicisation,” she said.

At the end of the clip, Jurie said, “I am now ready to hand over the crown,” before removing the crown from her head.

She is expected to appear in court on Monday, April 19, according to the Associated Press.