These pageant contestants are activists too — tackling education, health, and equality.

For critics, beauty pageants are an outdated hangover of a patriarchal society that values women only for their beauty. For fans, pageants are a platform for showcasing women’s empowerment, diversity, intelligence, and leadership.

Women who take part in pageants have utilised the platform, and their own platforms, to empower other women, others have also used pageants as a way to advance their careers.

Pageants also have prizes which can change lives — at some pageants, like Miss Universe and Miss America, winners receive scholarships that could help them further their education.

Women like Global Citizen Ambassador Priyanka Chopra-Jonas, who took home the Miss World title in 2000, used the platform given to them to not only build an international career in film and television, but also help change the world for the better.

Throughout the years, pageants have been criticized for demeaning women, for example at the Miss Universe pageant in 2000 that took place in Cyprus, there were protests outside the venue of the pageant. Feminists and religious groups protested the pageant as an affront to feminism.

But for many supporters, pageants have evolved from being about judging a woman based on beauty alone — with one example of this being the question and answer section of a pageant event, offering contestants the opportunity to speak on everything from their careers, dreams, and ambitions, to global issues and development.

While the running joke has it that contestants always say they want to “achieve world peace”, today, women in pageants give thought-provoking and empowering answers — helping shape the view of women as more than looks, but rather as the intelligent, resourceful, and ambitious beings they have always been.

Here are some of the best smart and empowering answers from pageants contestants and winners, through the years and around the world.

The longest reigning Miss Universe of all time, Zozibini Tunzi of South Africa, was asked during 2019’s Miss Universe pageant: “What is the most important thing we should teach young girls today?“

Tunzi answered: “I think the most important thing we should be teaching young girls today is leadership. It’s something that has been lacking in young girls and women for a very long time, not because we don’t want to, but because of what society has labelled women to be.“

“I think we are the most powerful beings in the world and that we should be given every opportunity, and that is what we should be teaching these young girls, to take up space,” she continued. “Nothing is as important as taking up space in society and cementing yourself.“

Miss Venezuela 2007 Dayana Mendoza, who went on to be crowned Miss Universe in 2008, was asked whether men or women have it easier in life and why.

At the 1994 Miss Universe pageant, Sushmita Sen of India was asked: “What is the essence of being a woman?”

Her reply was: “Just being a woman is God’s gift that all of us must appreciate. The origin of a child is a mother, and is a woman. She shows a man what sharing, caring, and loving is all about. That is the essence of a woman.”

At Miss World 2016, Gray was asked which qualities she thought it would take to wear the Miss World Crown, and she replied: “I think first of all, it takes bravery.”

She continued: “To be a Miss World is to carry a burning torch. It is like action carried out by one to illuminate the lives of many. And I would dedicate my whole self, my love for the arts, and my voice to trying to uplift, empower, and educate people. And it would be my greatest honor and duty to hold this torch high enough so that all the world could feel and see its light.“

The question directed to India’s Lara Dutta at the Miss Universe finals in 2000 was: “Right now there’s a protest going on, right here in Cyprus, calling the Miss Universe pageant disrespectful of women. Convince them that they’re wrong.“

She answered: “I think a pageant like Miss Universe gives us young women a platform to foray in the fields that we want, be it entrepreneurship, be it the armed forces, be it politics. It gives us a platform to voice our opinions and choices, and makes us strong and independent, that we are today.” 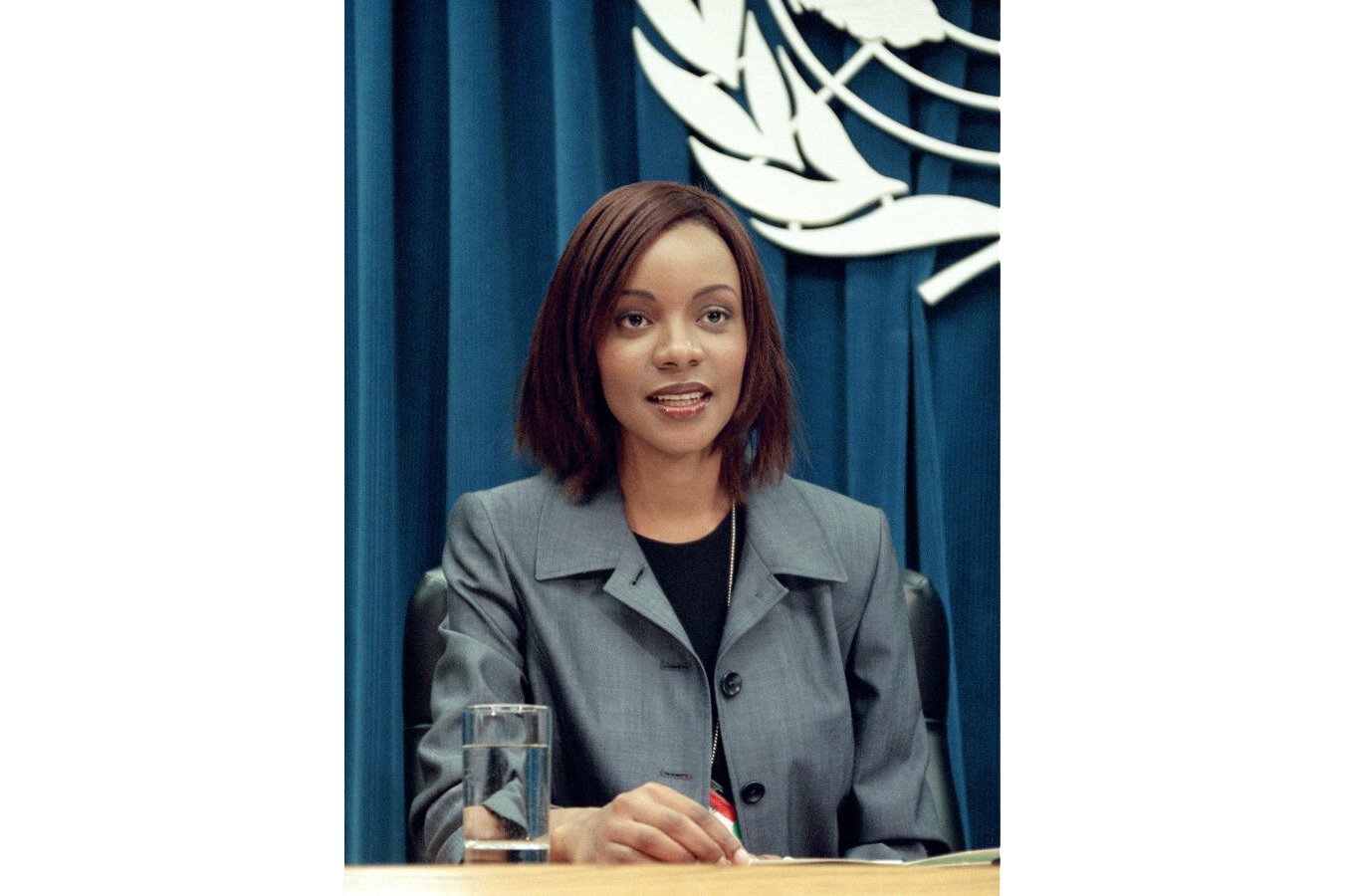 Botswana’s Mpule Kwelagobe answered: “Personally, I think Miss Universe is a symbol of a woman as well, she is celebrating her femininity. And I believe that,  if she should fall pregnant, it would not in any way interrupt her duties. But, as a woman she should celebrate her femininity.“

Kwelagobe, who’s now a businesswoman and model, went on to be crowned as Miss Universe 1999.

As part of the 2017 Miss Universe finale, South Africa’s Demi Leigh Nel-Peters was asked: “What quality in yourself are you most proud of and how will you apply that quality to your time as Miss Universe?”

Her winning answer was: “As Miss Universe you have to be confident in who you are. Miss Universe has to overcome her fears and teach others to do the same. And nothing is ever too much to ask for. That is exactly who I am.”

During the 1997 Miss Universe pageant, USA contestant Brook Lee was asked: “If there were no rules in your life for one day and you could be outrageous, what would you do?”

Her unexpected answer delighted the audience, as she said: “I would eat everything in the world. You do not understand. I will eat everything twice.”

The answer was a light nod to the policing of women’s choices across body image and eating habits. Lee went on to be crowned Miss Universe 1997, the first native Hawaiian to do so. 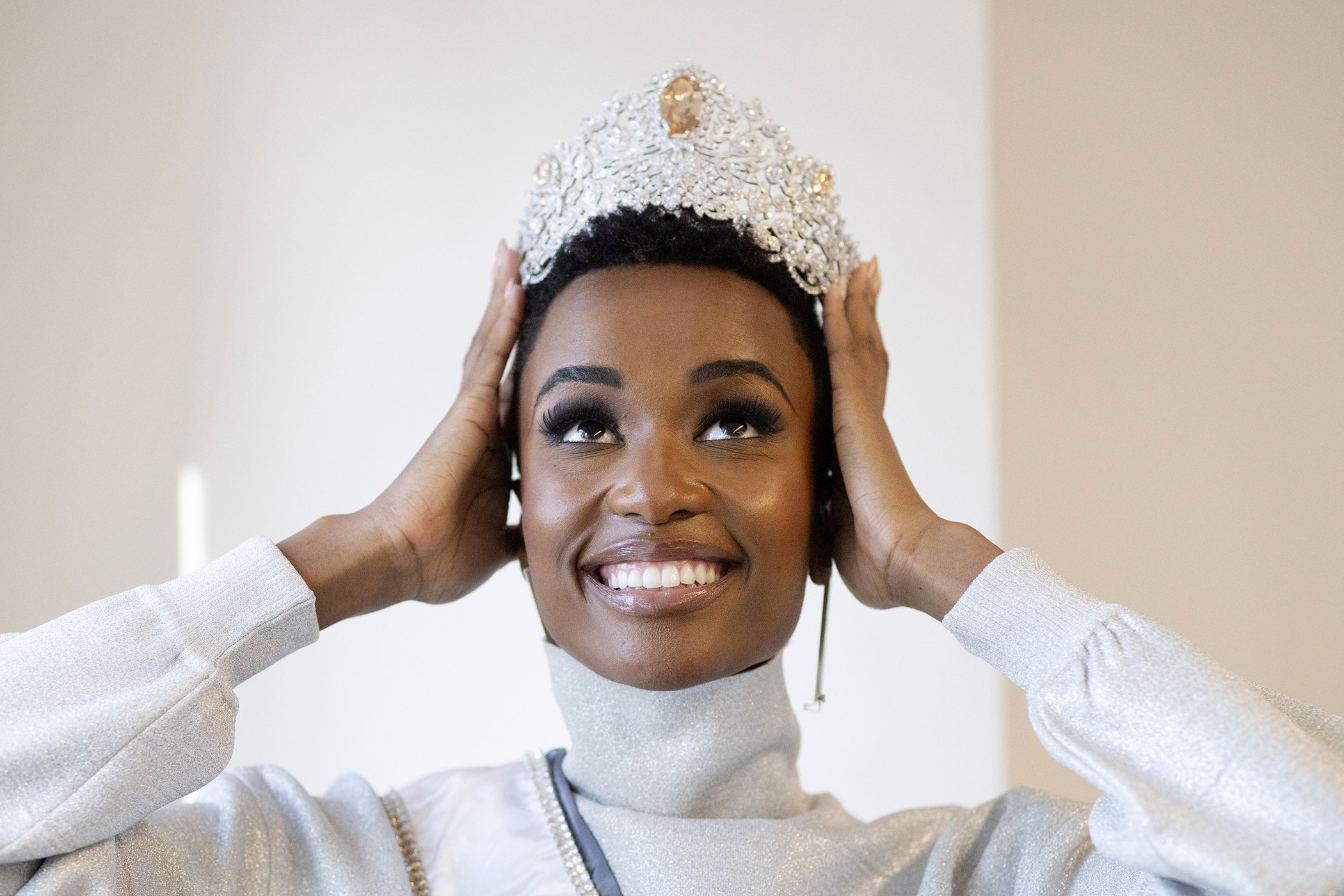 Miss Universe 2019 Zozibini Tunzi, of South Africa, poses for photos with her crown after an interview in New York on Dec. 11, 2019. Image: Mark Lennihan/AP

During the annual Miss South Africa pageant in 2019, Tunzi was asked: through all the darkness that South African women face, emotional, physical, sexual, and economical abuse, what reason do they have to keep smiling?

In a refusal to bow to the pressure on women to always be smiling, she answered: “We have absolutely no reason, because South African women keep dying everyday and people are doing nothing about it. I think it’s time to stop asking women what to do and start asking perpetrators to do better, be better, to start treating women the way they deserve to be treated. It is not up to us, it is up to the perpetrators to start doing better.”